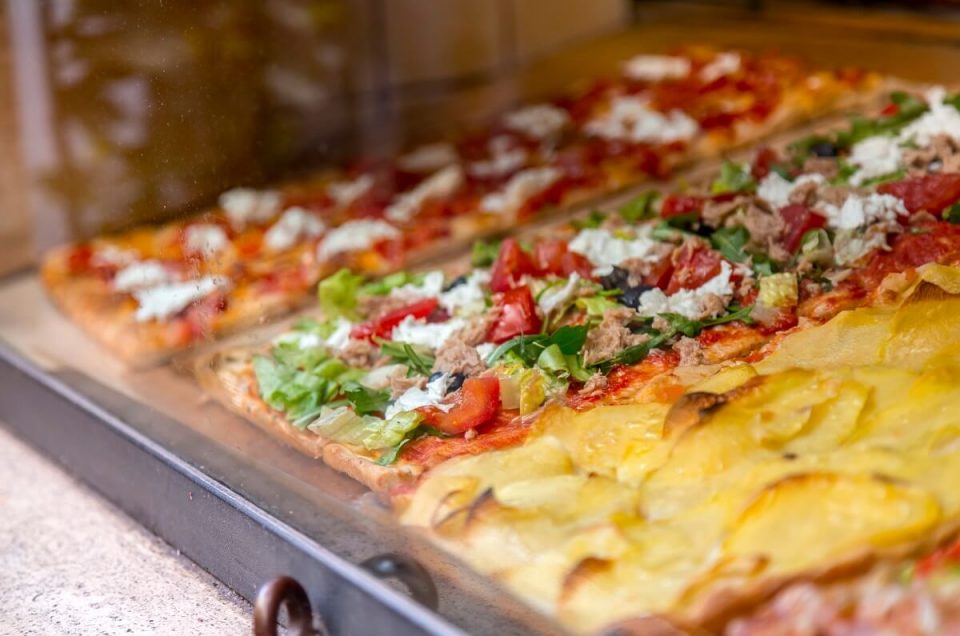 It may be because of the mild and generous climate, for the beauty of the historic alleys where you always like to get lost, but eating while walking around the city is a deeply rooted habit in the Romans, who can rely on a series of practical and simple products to enjoy while staring at some of its beautiful monuments.

The slices of pizza, for example, or the supplì, the rice croquette with a stringy, greedy and irresistible heart. From sweet to savory, here are the traditional street foods to taste in Rome.

The culinary tradition of the city is very long and full of marvelous recipes. In this article we want to resume the most common snacks local people use to eat while walking through the city or, if you prefer, before the meal, during an aperitivo or as an appetizer while seating at the restaurant.

A specialty resulting from the encounter between Jewish and Roman traditions, cod filets are an institution in Rome, prepared on Christmas Eve but actually available also during the rest of the year.

The filet is dipped in batter (sparkling water and flour) and then fried in boiling oil: the result is a crunchy, golden product with a melt-in-your-mouth and succulent filling.

It is usually ordered as an appetizer, but there are also those who choose to consume it as street food, walking through the streets of the center.

A typical food of the hills in the southern part of the city, also known as Castelli Romani, Porchetta is a recipe based on cooked pork, which since 2011 has obtained the recognition of protected geographical indication.

Porchetta is a great classic of regional cuisine. It can be tasted in purity, but the most traditional way is on the go, inside a sandwich. The choice is up to you.

Over the years, pizza by the slice, in a pan or on a shovel, has become one of the most common street food in the city, but to give an authentic change to this world was – in Rome, in Italy and above all abroad – Gabriele Bonci, exceptional master pizza maker who has revolutionized the way of conceiving and approaching this art.

In the past, the pizza cut was rather crunchy, thin, rich in toppings, but today there are many variations of this product, from the rising times of the dough to the type of flours chosen and, of course, to the fillings.

One of the most common ones is of course pizza and mortazza, or white pizza stuffed with mortadella. A classic Roman snack.

A rice croquette with tomato, hiding a heart of stringy mozzarella inside: the name derives from a distortion of the French term “surprise” (surprise), used by soldiers from across the Alps present in Rome in the nineteenth century to describe the wonder of product, which contained a “surprise”, the mozzarella filling.

Originally the rice was seasoned with classic ragù or with chicken regaje, but more and more frequently there are many delicious variations: vegetable sauces, amatriciana, cacio e pepe and so on.

The youngest among the street food is the trapizzino, a recent invention by Stefano Callegari, a well-known name in the Roman gastronomic scene and beyond.

Trapizzino has become a street food that immediately attracted the enthusiasm of gourmets from all over Italy, and which has now become part of the must-have tastings during a holiday in the Eternal City.

Trapizzino is a triangular-shaped pizza pocket crunchy on the outside and soft on the inside, filled with traditional sauces, from chicken to cacciatora to tripe, from tongue in green sauce to meatballs with sauce, from eggplant parmigiana to burrata with anchovies, and much more.

One of the symbols of Roman summers, the grattachecca is made with ice “scratched” from a single large block, combined with fruit syrups.

The first kiosks of the “grattacheccari” began to spread through the Trastevere alleys at the beginning of the twentieth century, a period in which the Romans got into the habit of walking around the city sipping the cool drink, a practice that continues today.

A sort of street food to drink, which soon became popular in all neighborhoods. The custom of manually scraping the ice over time has been somewhat lost in favor of more practical and faster methods such as the use of an electric ice crusher, capable of shredding the ice into small pieces, to which juices are then added. fruit or syrups.

The best known variant, today, is the one with whipped cream, but the historical recipe is of smaller size and dark color, enriched with raisins, pine nuts and candied fruit.

One of the most popular legends tells that in Roman times these sweet breads were the typical gift for women from the future husband, called with the burlesque nickname “Maritozzo”. In fact, a ring or a gold object was often inserted inside the cake as a token of love.

In the beginning, however, the recipe of the dough included a mixture of flour, eggs, honey, butter and salt, while today it is prepared with flour, water, yeast, sugar, milk and oil.

Now that you know everything about Street Food in Rome, there is just one thing left to do: try these marvelous snacks while walking through the city, just like a local would do.

The places where you can buy these foods are basically everywhere, but the team of InRomeCooking has selected the best places to bring our hosts in order to let them experience Roman Street Food at its best.

This deep research led us to build our “Discover and Taste Roman Street Food Tour”.