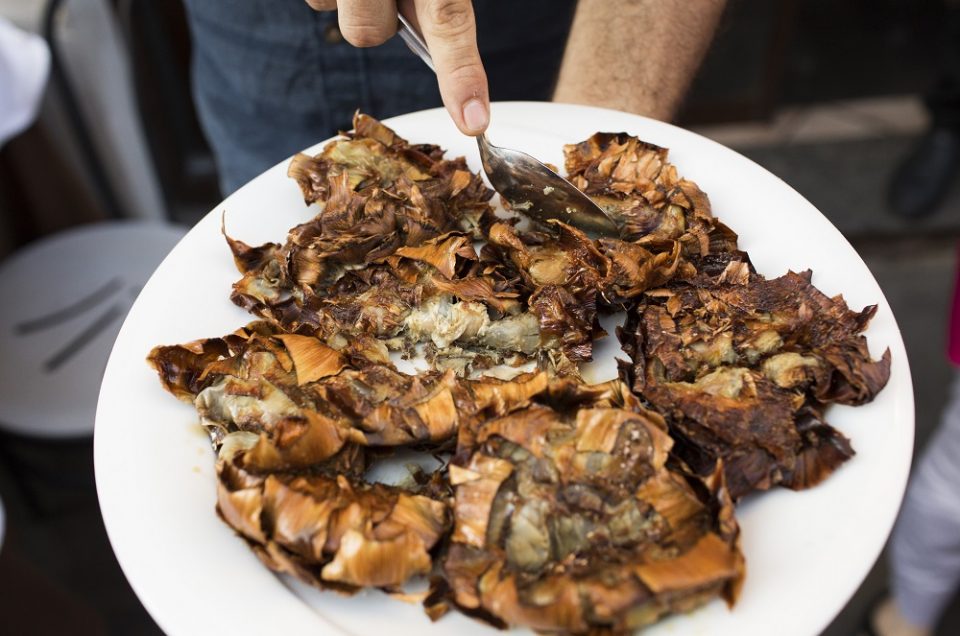 These two succulent artichoke recipes, which are considered appetizers or side dishes, might look the same at first sight as both are whole fried Roman artichokes. However, they are cooked in two different ways and you can definitely notice it when you try them both.

This typical Roman-Jewish dish is an antique recipe that was born in the Rome Jewish Ghetto around the 16th century. At that time, people used to eat fried artichokes to break fast but it has become so popular that it is now served year-round in many Roman restaurants and especially in the Ghetto.

Seasoned with salt and pepper, Jewish-style artichokes are dunked in a deep vat of olive oil. They are then deep-fried until crispy, resembling well-cooked potato chips in both taste and appearance. Only so much healthier, and so much better.

The best place to eat carciofi alla giudia is in the Jewish Ghetto (a stone’s throw from the Theatre of Marcellus on the foot of the Capitoline Hill) though you’ll find them in many restaurants throughout the Italian capital.

Here’s our virtual cooking class for making Jewish-Style Artichokes: (Scroll down for the ingredients and recipe)

This recipe, slightly different from the previous one, is also an integral part of the Lazio culinary tradition. Thanks to only 3 additional ingredients, Romans added a lot of value to this “dish of the poor”.

Carciofi alla romana are a simple fare. Sliced open in the center, they are stuffed with a fresh mixture of parsley, mentuccia (lesser calamint), garlic, salt, and pepper. Positioned upright in a pan, they are then doused in water and white wine before being braised in the oven and served warm or at room temperature.

So now, you just have to try both recipes to decide which one you like the best 🙂