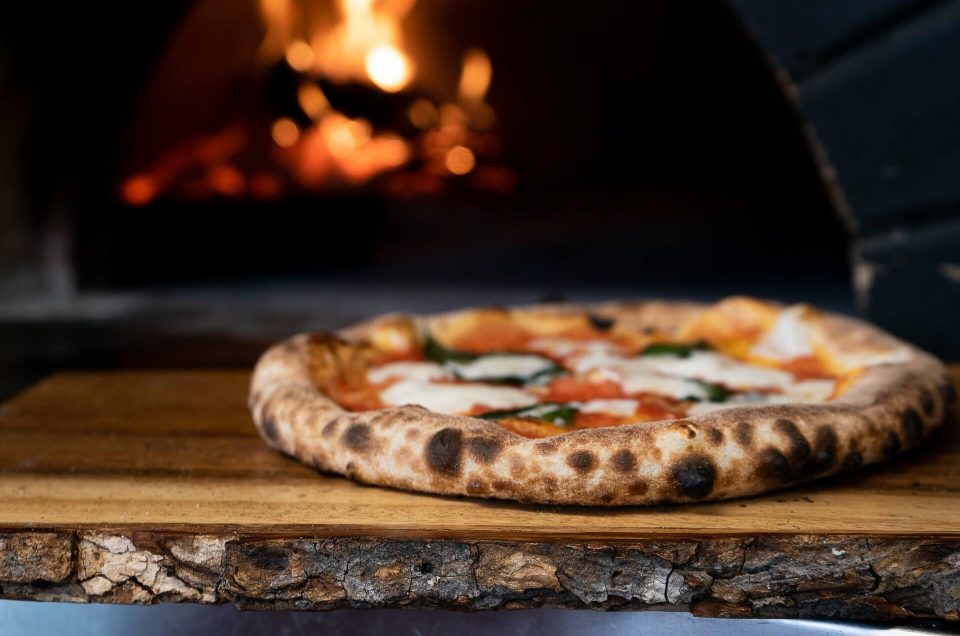 To most non-Italians, pizza means one thing: a round of doughy crust topped with tomato and mozzarella. In Italy, however, there are about as many types of pizza as there are people living in Naples.

We know it can be overwhelming. That’s why we’ve written a guide of the classics so you know just what to order!

As many Italians will tell you, pizza was born in Naples.

The Neapolitans are pretty pernickety about their pizza-making. They have even created a registered discipline in Neapolitan Pizza Making to keep it in their preserve. They use no fat in the dough and add lots of water to make it wet and sticky.

Typically, the dough is left to rise at room temperature for a good amount of time – 8 to 24 hours – before the dough is rolled out and cooked in a wood-fired oven.

Neapolitan pizza cooks at soaring temperatures (around 450°C) and for a short amount of time (a maximum of 90 seconds). The result is wonderful: a gooey soft centre which is boarded by a tall, fluffy crust or ‘cornicione’.

In Naples, they are so evangelical about their crust that they use hardly any toppings to garnish their pizza. In the most traditional pizzerias they only make two types of pizza: Marinara (tomatoes, garlic, oregano and olive oil) or Margherita (tomato, mozzarella, basil and olive oil).

→ Perfect the art of pizza-making in our pizza masterclass.

Roman pizza is practically the opposite to Neapolitan pizza: it is crispy and they are not afraid of toppings. A classic on all menus in Rome is the Capricciosa: topped with ham, mushrooms, olives, artichoke, an egg and tomato. Oil is added to the dough and there is much less water than the Naples version. The pizza is cooked for up to 3 minutes at around 350°C and therefore the result is something completely different to the pizza of Naples: way crispier. All over Rome you can find round pizza or ‘al taglio’ which is by the slice.

Long strips of pizza are topped with the most delicious toppings and then cut and sold by weight and wrapped in paper. It is original Roman street food and it is an institution of the city loved by all but you can also find it all over Italy.

→ Join us for a pizza & gelato class and learn to make Roman pizza yourself! Sicilian pizza has a thick spongy dough and is probably most similar to American style pizza as many Sicilians migrated to the US which inevitably influenced the food of America.

Sicily grows extraordinary durum wheat and their pizza benefits from the delicious flavour of the rich flour.

Of course, the local tomatoes and oregano also make for bold and delicious toppings. The dough is left to rise from 2 hours to 72 hours and then cooked at around 300°C for 3 or 4 minutes. All over Sicily you can find food carts selling hot slices of ‘Sfincione’- typical Sicilian pizza.

Perfect with a cold beer, preferably on the beach! Pizza without sauce may seem strange, but it has been a favourite of Italians since Roman times.

In fact, menus here usually differentiate between ‘red pizza’ with sauce and ‘white pizza ‘without sauce. Both are delicious and it serves well to order from each and share between two.

The ancient Romans used to cut their pizza in two and eat it with figs or cheese and chicory.

Nowadays in Rome, the most popular filling is mortadella, a ham from Bologna sometimes studded with pistachios which pairs beautifully with fresh white pizza. Tuscany has their own version ‘Schiacciata toscana all’olio’, an old farmer dish that was pressed – or ‘Schiacciato’ on a red – hot stone and then filled with local hams, cheese and vegetables.

It is now a feature in bakeries all over Florence.

So next time you come to Italy you will know exactly which pizza to order in which city!

→ Join us in Rome for a Pizza and Roman Antipasti class